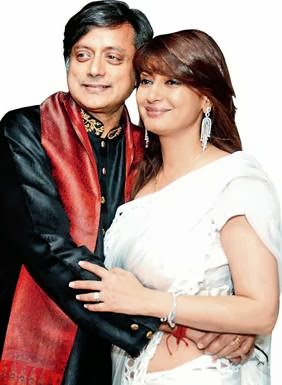 Sunanda Pushkar, wife of Union minister of State for Human Resource Development (HRD) Shashi Tharoor was found dead in suite 345 of Leela hotel on January 17, 2014. The sudden death of her is caused mainly due to two reasons. First is, it is believed that she has committed suicide by consuming an overdose of sleeping pills. Second is, Her death comes within 48 hours of her going public about her husband’s alleged affair with a Pakistani journalist Mehr Tarar, although no note has been found and police investigations are going on over her mysterious death.  The police have asked the Five Star hotel Leela Palace which is in New Delhi’s Chaitanyapuri area to give them all the CCTV footage of the last 12 hours and have even said that the 52-year-old woman had been last seen in the hotel lobby around 3.30pm.
The Special commissioner of police Deepak Mishra confirmed her death saying that there were no apparent injuries on the body and suite 345 of Leela and the entire third floor had been sealed. And, were informed by Tharoor’s PS Abhinav Kumar that the couple had checked into the hotel on Thursday who have moved out of the minister’s official bungalow as it was being painted. Tharoor who has left the hotel at around 8.a.m to attend the AICC (All India Congress Committee) meeting whole day have returned at 8pm. He along with the hotel staff had to break into the room after she did not respond to the repeated knocks on the door by her husband where they reportedly found her dead on the bed covered with a duvet. around 8.30 p.m. Sunanda had  published messages allegedly sent by a Pakistani journalist, Mehr Tarar to Tharoor, proclaiming Tarar’s love for Tharoor from her husband Shashi Tharoor’s Twitter account on 16 January, 2014. People like TV anchors who had spoken to Sunanda in the past two days said that she had spoken about her poor health and depression and was very disturbed and depressed over her husband’s relationship with Tarar. This was followed by another tweet in which she replied to one of her friend enquiring about her health. “will try, got so many issues diagnosed in KIMS (Kalinga Institute of Medical Sciences) that now who knows when I got 2 go with joy hastay huey jayengey.”
As per the sources, Sunanda was with Tharoor in Thiruvananthapuram last week, underwent treatment at a private hospital two days ago. She was unwell and diagnosed with Lupus and stomach tuberculosis, said a hospital source. Lupus is a medical condition arising from deficiency in immunity which damages healthy tissues. It is learnt that she had spent four days in hospital. By considering all the evidences and proofs, Police sources said it could be a “natural or unnatural death”. They said all angles were being probed: suicide, poisoning and death due to a sudden heart attack. The body of Sunanda Pushkar, was shifted to the AIIMS for postmortem today which would be carried out around noon by a team of doctors and the report could be available later in the evening.
This was the third marriage to the couple.  Tharoor, who left his job at the UN, returned to India in 2008. Soon after, he divorced his Canadian diplomat wife Christa Giles, and married Sunanda in 2010. He has two sons from his first wife, Tillotma. After he was elected to the Indian Parliament, the couple had a Malayali wedding ceremony in Tharoor’s ancestral home at Elavanchery in Kerala,  India.
Sunanda Pushkar, was born on January 1, 1962 in a Kashmiri  family of landlords and  Indian Army officers. She was a daughter of Lt. Col. Pushkar Nath Dass, who retired from the army in 1983. While studying at the Government College for women, she married a fellow Kashmiri Pandit  and a hotel management graduate Sanjay Raina. The couple divorced in 1988. Subsequently, she went to Dubai  in 1989 and married Sujith Menon in 1991. Their son Shiv who is 21 year old now was born in November 1992. Sujith died in an accident in Delhi in March 1997. She was a Canadian businessperson, a sales manager in the Dubai-based TECOM Investments, and a co-owner of the India-based Rendezvous Sports World.
People who were close to her such as friends, relatives, family were in deep shock by her ascertained death. Especially, her close friends, TV anchors and reporters who spoke to her over past two days could not digest this news. Late in the night Prime Minister Manmohan Singh spoke to Tharoor and condoled Pushkar’s death and said “I am deeply saddened at your loss. May God give you strength in this hour of grief.”
Share
Facebook
Twitter
Pinterest
WhatsApp
Previous articleOther Topics
Next articleAmber And Depp’s secret engagement was caught by the cameras