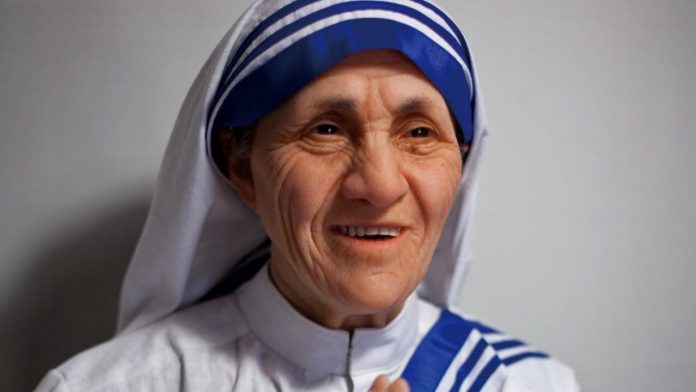 Agnes Gonxhe Bajaxhiu (Teresa) was born in the town of skopje, Kosovo. She was last of the three children. From a young age, she had a desire to serve the Lord as an overseas missionary.  In 1929, she got an opportunity to travel to India.  She left Europe and join the sisters of Loreto, a religious community of missionary nuns in Calcutta.  It was during her life in the convent that she took the name “Teresa” and lived a life of poverty, chastity and obedience.

As a religious nun in Calcutta, she was assigned to teach geography and catechism at St. Mary’s High School, and in 1944, she became the Principal of the High School.  Around the year 1946, Teresa received her second vocation to serve the Poor in the heart of Calcutta.  To fulfill this calling, she had to leave the convent of Loreto, with the permission of her Archbishop.  Only in 1948, she was able to leave her community and start an open-air school for children with the help of church volunteers and the municipal authorities.

Towards the end of 1950, she started her own society called the Missionaries of Charity.  The society’s charism was  was to care for the destitutes, homeless, the lepers, the crippled, the blind and abandoned children.  Filled with an inner drive to help the suffering, she plunged herself head-on in her work, only to face monumental difficulties.  In the late 1950s, people and the government understood her work and began to assist her.  They offered an abandoned Hindu temple where she opened a Home for the Dying.  From then on, she went on to open many homes dedicated for the lepers, Hospice centers, Orphanages, etc.  Her work began to spread and people began to appreciate what she did. More and more young women began to join her and Teresa was able to expand her order and work to other countries.

By the year 1970, her name and fame was firmly established and she became a source of inspiration for many people.  All the governments across the world recognized her service and began to felicitate her with awards and donations for her homes. Nawaz Sharif, the then Prime Minister of Pakistan said that Teresa was “A rare and unique individual who lived long for higher purposes. Her life-long devotion to the care of the poor, the sick and the disadvantaged was one of the highest examples of service to humanity.”  Like him, many Prime Ministers and President praised her service and welcomed her to their respective countries to open homes.

Her tireless work among the poor took a toll on her health.  Despite her setback in health, she continued to head the Missionary work and traveled a lot visiting her homes abroad and establishing many.  In 1997, she fell and broke a collarbone and suffered failure of her left ventricle and since then she began to decline and deteriorate.  The end came in September 5, 1997 at the age of 87.

When she died, she left behind 610 missions in 123 countries.  The work she started is still being continued by her nuns. There are 1000s of nuns who continue her work of love through the mission centers.