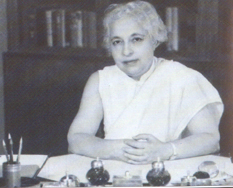 MORE PICS OF INDIAN FEMALE FREEDOM FIGHTERS >>>
RANI OF JHANSI :
Rani Lakshmi Bai of Jhansi was an
outstanding freedom fighter.  She used to
go into the battlefield dressed as a man. Holding the reins of the horse in her
mouth she used the sword with both hands.
She died bravely in the battlefield fighting for freedom of our country.

SAROJINI NAIDU :
When Gandhi launched the Civil Disobedience Movement, she
was in the forefront.  With great courage
she quelled the rioters, sold proscribed literature, addressed frenzied meetings
on the carnage at Jallianwala Bagh in Amritsar.  As a follower of Gandhiji, she accompanied
him to England
and whenever in England,
she openly criticized the British rule in India
which caught the attention of scholars and intellectuals.  She was finally arrested and was interned
before imprisonment.
KASTURBA GANDHI :
The wife of Mohandas Gandhi was the leader of Women’s Satyagraha for which she
was imprisoned. She helped her husband in the cause of Indigo workers in
Champaran, Bihar and the No Tax Campaign in Kaira, Gujarat.
She was arrested twice for picketing liquor and foreign cloth shops, and in
1939 for participating in the Rajkot
Satyagraha.
She died in Mahatma Gandhi’s arms while both were still in prison. He was never
the same after her death.

ARUNA ASAF ALI  :
She was an active member of the Congress Party and
participated in public processions during the Salt Satyagraha. She was arrested
on the charge that she was a vagrant and was not released until 1931.   However, the other women co-prisoners refused
to leave the premises unless she was also released and gave in only after
Mahatma Gandhi intervened. A public agitation secured her release.  Aruna was dubbed the Heroine of the
1942 movement for her bravery in the face of danger and was called Grand Old
Lady of the Independence movement
in her later years.
INDIRA GANDHI :
She was active in the national liberation struggle from an
early age.  During the 1930 movement, she
formed the ‘Vanar Sena’, a children’s brigade to help freedom fighters.  She became a member of the Indian National
Congress in 1938. Soon after her return to India
in March 1941, she plunged into political activity.   Throughout her career in politics, she was
loved and respected by many.
KAMALA NEHRU :
She was the wife of Nehru.  During the freedom movement,  she organized processions, addressed meetings
and led picketing of liquor and foreign cloth shops.  In the Non Cooperation movement of 1921, she
organized groups of women in Allahabad
and picketed shops selling foreign cloth and liquor. When her husband was
arrested to prevent him from delivering a “seditious” public speech,
she went in his place to read it out. She was twice arrested by British
authorities.
VIJAYALAXMI PANDIT :
Jawaharlal Nehur’s sister, Vijayalakshmi Pandit, inspired by Rani Lakshmi Bai
of Jhansi, and impressed by
Sarojini Naidu, entered the Non Cooperation Movement. She was arrested in 1932
and was sentenced to one year’s rigorous imprisonment. She was arrested again
in1940 during the Quit India Movement.


MADAM CAMA :
She was called the Mother India’s first cultural
representative to USA.  She informed the Americans about Indians
struggling for Independence. She
told about British efforts to smother the voice of educated Indians who protested
against tyranny and despotism of British who always boasted themselves as
“mother of parliamentary democracy” over the world.  Her sacrifice and work is still etched in the
hearts of minds of Indians.
BEGUM HAZRAT MAHAL :
She was a royalty who actively took part in the defence of Lucknow
against the British. Although, she was a queen and used to a life of luxury,
she appeared on the battle-field herself to encourage her troops. She stood up
against the British with all her strength as long as she could. Ultimately she
had to give up and take refuge in Nepal.
MISS PADMAJA NAIDU :
Sarojini’s daughter, Miss Padmaja Naidu, devoted herself to
the cause of the nation like her mother.   At the age of 21, she entered the national
scene and became the joint founder of the Indian National Congress of
Hyderabad. She spread the message of Khadi and inspired people to boycott
foreign goods. She was jailed for taking part in the “Quit India”
movement in 1942.  Her services to the
Nation and especially her humanitarian approach to solve problems will long be remembered.
SUCHETA KRIPALANI :
The contribution of Sucheta Kripalani in the struggle for
freedom is noteworthy.  She became a
deeply involved in the Indian National Congress and fought tirelessly during
the Quit India movement.  She was a close
confidante of Mahatma during the partition of India.  Even after the Independence,
she served India.

FOREIGN WOMEN INVOLVED IN THE
INDIAN INDEPENDENCE :
There were a number of women from foreign countries who
worked for the cause of our Independence.   Their contribution, sacrifice, and
commitment to work with our famous leaders of freedom struggle are deeply
embedded in our hearts and minds.
SISTER NIVEDITA :
She arrived in India
from Ireland in
1898.  She personally took of cause of
Indian struggle to Europe and the USA.   She was the disciple of Swami
Vivekananda.  He described her as a real
lioness.  It was Swami Vivekananda who
gave her the name Nivedita which means “one who is dedicated to God.  Throughout her life in India
she not only worked for the freedom struggle but also she dedicated her life
for the improvement of the lives of Indian women of all castes.
ANNIE BESANT :
Annie Besant is an Irish lady.  In
1914 she joined the Indian National Congress and gave it a new direction.  The idea of the Home Rule League was first
discussed by her. She with the radical congress leader Tilak presented a
memorial to Montagu on December 18,
1917 which gave equal rights to women in the matters of political
franchise. She was the first woman president of the Congress and gave a
powerful lead to women’s movement in India.
MEERA BEN AND SARLA BEN :
These two exemplary souls were known affectionately to many as
Mahatma Gandhi’s English daughters.  They
took part in Second Round Table Conference with Gandhi, worked with him in the
campaign against the British.  They
undertook Khadi tour throughout the country.
They helped the families of political prisoners.  Several times they went to prison along with
Gandhi to give us freedom.
Share
Facebook
Twitter
Pinterest
WhatsApp
Previous articleLegends Life Stories
Next articleWHAT IS RAMADAN