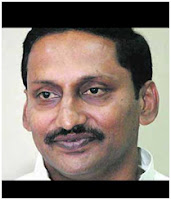 NALLARI KIRAN KUMAR REDDY
Nallari
Kiran Kumar Reddy was born on 13 September 1960 is an Indian Politician who has
been the 16th Chief Minister of Andhra Pradesh since 2010. A four
time MLA in Andhra Pradesh, he belongs to the Indian National Congress. He was
sworn in as the Chief Minister of Andhra Pradesh after Konijeti Rosaiah
submitted his resignation to Governor ESL Narasimiah on 24 November 2010. Kiran
Kumar Reddy was born in Hyderabad to Sarojamma and N. Amarnath Reddy, a former
Congress party member and a minister in P.V. Narsimha Rao cabinet as he was
considered close to late Indira Gandhi and P.V. Narsimha Rao. His family hails
from Nagaripalle, near Kalikiri Chittoor district. He did his schooling from
HYDERABAD PUBLIC SCHOOL, intermediate from St. Joseph junior College,
Hyderabad. He did his B.com from NIZAM COLLEGE and LL.B from University College
of Law, Osmania University.

He was the captain of the Hyderabad under 22 South Zone
Universities and Osmania University cricket team. He was a great cricket player
and a brilliant student of his time.

POLITICAL CARRER:
Kiran Kumar Reddy was elected to Andhra Pradesh Legislative
Assembly in 1989 after his father’s death. He served as a member of the Public
Undertaking Committee and Assurance Committee. He was elected to the state
assembly from Native Vayalpadu (Valmikipuram) in 1989, 1999 and 2004.
Kiran Kumar Reddy was unanimously elected as a speaker of
the 13th Andhra Pradesh
Assembly in June 2009. His name for the speaker’s post was proposed by erstwhile
chief minister Y.S Rajashekhar Reddy, and many leaders of different parties.

SCHEMES INTRODUCED BY KIRAN KUMAR
REDDY
Kiran Kumar
reddy introduced various schemes in his ministry like; MEE SEVA,Rachabanda,
Rajiv Yuva Kiranalu, Indra Jala Prabha, Re 1 per kg Rice, Stree Nidhi. This
scheme makes Kiran kumar reddy a hero for the development for the state. Let’s
have a brief discussion about these schemes:
Mee Seva: The rural common man needs at least
50 essential certificates which make a common man life easy. Mee Seva is meant to cut
the red tape out of it.
Rachabanda: Its Kiran’s mass contact programme
meant to boost delivery of government services, such as ration cards, pensions
etc.
Rajiv Yuva Kiranalu: The Kiran government policy that
jobs will solve all problems is encapsulated in this ambitious programme.
Indra Jala Prabha: This is a scheme that tweaks an existing
programme to deliver benefits to a large vote bank.
Re 1 per kg rice scheme: This is the scheme launched by the
present cm Kiran Kumra Reddy. One kg of rice can be bought at just rupee one
which is a very impressive scheme.
Stree Nidhi:This scheme introduced to protect
women from the borrowing money from private finance groups who charges high
interests. Women can get loan upto Rs 15000 repayable in 24 installments. It
will be a bank just for women.

BAD TIMES OF KIRAN KUMAR REDDY: The chief minister of Andhra Pradesh
Mr. Nellari Kiran Kumar Reddy has seen good time more than bad time. He faced
many critical situations and agitations and strikes against his government
during his leadership. He was targeted by many of his oppositions and kiran Kumar
reddy according to the opposition was a failed Chief Minister. But inspite of
all those critical situation he never let state’s financial position to get
worst.  The latest incident occurred recently
when The Chief Minister Mr N.Kiran Kumar Reddy, came down heavily on the Telugu
Desam president, Mr. N. Chandrababu Naidu, for taking up his Rythu Poru Bata.
Share
Facebook
Twitter
Pinterest
WhatsApp
Previous articleTATA GROUPS
Next articleInteresting facts about BRAIN