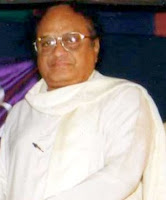 Dr. Cingireddy Narayana Reddy aka C Na Re received the prestigious Jnanpith Award in 1988 for his contribution to Telugu literature. He was born at  Hanumajipeta,Karimnagar district. He completed is Master’s degree and Ph.D. degree in Telugu literature from Osmania University.He worked in Osmania University as a professor and attained very high positions and earned many awards. It could be surprising to learn that Dr.CNR studied in Urdu medium till his graduation. Dr.CNR is the only Telugu person who has received Jnanpith Award other than Sri Vishwanadha Sathyanarayana.
He was nominated to the Rajya Sabha later. Students of Dr.CNR are often heard recollecting his grip over the language, especially his poetry reading sessions.He is also popular by virtue of being a lyricist to several famous Telugu films. DOB: 29-07-1931.